Below is an emel forwarded by a friend, couple of days ago..

I don't usually care two hoots bout emel like tis.. bcse its not from a reliable source - PERIOD. but since i've learned from da papers that the false accusation via emel n sms on Hotdogs are affecting their business.. i can't help but to feel sorry for them..

most of the hotdog manufacturers are well established with big capital.. they could withhold a minor glitch in their orders.. but for petrol kiosks.. they are privately operated by an individual.. so if emel like tis keep spreading.. no matter how big or small da company is.. it will affect them to some extend.. da ppl there are working cari rezeki halal n they do have a family to support.. how would you feel if ppl are attacking your source of income!!

Phew.. juz got back from Kuala Terengganu.. n wow! da weather sure is hot up ther.. lucky thers a lot of icy treats to cool us down.. alhamdullilah.. our presentation agenda went as planned.. us here includes ma bos (filzah), pn suriya, izhar n meself..

but there are few incidents started from day one, whereby ma bos mistakenly checked-in her Penang flight scheduled for next wk instead of todays flight to tganu.. not realizing da erroor we followed her to da gate written on on boarding pass that she was holding.. upon reaching da gate.. only then we realised she had checked da wrong ticket.. guess what? i hav to sprint from one end from gate A5 to gate B5.. which is on the other side of da airport whilst chugging around a 3 kg notebook batu.. luckily we reached da gate in time n we were da last passenger to be on board.. :P

Arrival in terengganu is with a bang!.. and mean it litterally.. da pilot must hav appoached for landing too fast n a bit high.. where he had to drop da plane on da runaway.. which resulted in da rough landing n loud banging sound.. to illustrate da severity further.. even da overhead compartment where i put da notebook batu opened on impact.. n i was ready to release ma seat belt in anticipation of da nb falling on a innocent passenger.. sure bengkok kepale kalu jatuh tu.. but luckily it stay in da compartment..

first day we had en Zahid as our tour guide.. brought us for lunch.. shopping at pasar kedai payang (where i bought lots of keropok kering..) n dinner at night.. below are some photos in da sequence of events.. 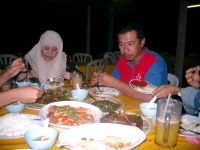 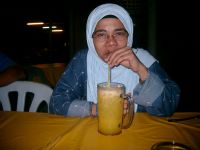 Pn Suriya havin a sip of orange juice.. although we did not go to Gelas Besar at seberang takir.. da mug she's drinkin out of now is quite big also.. 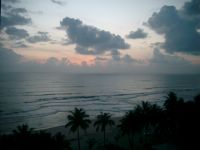 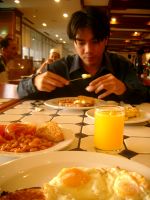 Izhar (right).. da japanase dude slow on on da morning grub as thers no ramen served for breakfast at our hotel.. 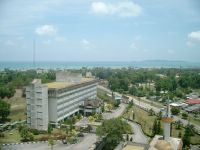 Telekom Training College aka TTC Marang.. brings back nice memories as ma induction program was held here for a month.. about 200 plus of us were enrolled under the MTP program.. photo was actually taken from the hostel which i stayed.. notice pulau kapas in da horizon.. 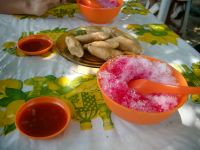 appart from da view of pulau kapas.. of course we would never forget da tasty keropok leko hot from da kuali n da refreshing ais kachang sold in front of da TTC.. believe it or not.. da ais kachang is only 50 cents.. we had 2 plates of leko n 2 bowls of abc.. n only costs.. RM2.50.. 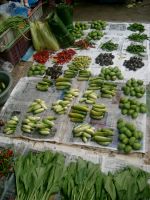 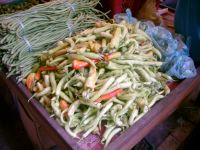 mini cucumber (left).. only available in eastern and northern region of our country..

lada putih or lada jepun (right).. they call it.. also available only in this part of the region.. bought both some of each the chili and mini cucumber for ulam.. nyum..

2nd day after da presentation Tini kecik took us for lunch.. n back on more by popular demand.. to pasar kedai payang for last minute shopping/exchange.. an hour or so.. we then headed towards da airport but with a quick pitstop at longsong for fresh keropok leko.. (Len.. bought some 4u also..) thanks tini for da trouble.. call me whenever u're in KL for lunch or something.. same goes for en Zahid :)

actually it has been 3 years since last i've been in Terengganu.. n i might say that.. da longer i dont visit.. da more i feel attached to this colourful state.. these 2 days had bring me back to remind da wonderful memories n it is safe to say that i've cultivated a soft spot for this state called terengganu..
Posted by kL at 12:48 AM 5 comments:

this is some review i've stumble upon.. if ya wanna know more bout da shop..

m not really a Liverpool fan.. as a matter of fact i don't have what we would normally call "team aku".. hehe.. juz would like to share this story though, about a fren of mine Ja'a.. he's a die hard fan of Liverpool since he can remember..

sometimes i would join da guys to watch liverpool matches on big screen at syed.. among us, Ja'a was da only Liverpool fan.. and if you been following the team's progress for the past month.. it is clearly that luck wasn't on their side eventhough they played well.. everytime his team lost.. da guys would tease him.. sometimes he would avoid us for days..

tension was amounting and his hopes were high on the recently Carling Cup match between Chelsea n Liverpool.. below is da story...

few days before da game at an undisclosed location ..

Obviously i didn’t join.. but da following dialogue was obtained from a reliable source..

our fren was exited as no goals were scored till towards da end of 2nd half... Chelsea scored da equalizer... followed by a landslide of goals after that.. each n every time Chelsea scored..

eventhough Livelrpool scored another.. in da end Liverpool lost to Chelsea 3-2.. You could imagine how our friend’s face looks like.. n da teasing begins..