Few months back I've treat myself with a gaming apparatus, Logitech Momo Force Feedback Wheel. Its an excuse for me to unwind and relax from work plus as a reward for milestones archived.
It's not an easy task to select this wheel as it quite old (long in market, since Windows 98) and there's a stream of incompatibilities discussions with Windows Vista in forums. Safe to estimate that 50% says it doesn't work and 50% said it works. Anyhow determined, I've boldly bought it with Collin McRae Dirt.

Exited, I've downloaded the latest driver and installed the game; hoping for instant action. Boy I was in a bind when I've discovered that the gas paddle was stuck all the way (full throttle) in the game. I've kept reinstalling the drivers, applying patches to the game but without avail till I've found a registry hack in Logitech's forum.

The registry hack was meant for something else, but heck I was desperate and willing to try anything to make it work. And guess what it does works :D I've finally had a proper go 3 hours after when I've initially started. The steering force feedback was was awesome and it feels and looks great. Paired with the realistic game of Dirt, I've was totally immense within the game.

Another note though for Windows Vista users, you also have to download the latest Collin McRae Dirt patch v1.2. There a vital fix which you require to load your saved gaming profile properly. 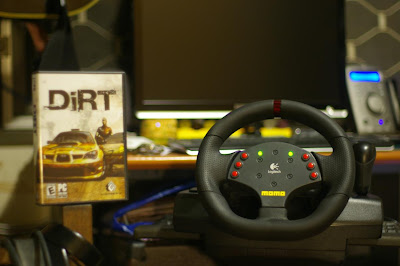 So there you go, if you're into driving simulation; the Logitech Momo is a great choice, plenty of fun, inexpensive (RM238) and it WORKS with Windows Vista. Collin McRae Dirt goes for RM119.
Posted by kL at 2:58 PM