Monopoly Here & Now : The World Edition - Vote for Our Country

It's been a while since I've last updated, but this Monopoly voting has made me itching for a post :)

I'm sure somewhere along the line when we are all growing up, we either had played or heard about the Monopoly board game. It's a fun family game for young and the old. I've never heard anyone who didn't have fun while playing the Monopoly.

In fact, this is a game that you can recall to this day when you're playing with your brothers, sisters, parents or friends which makes you smile by just remembering the moment.

To me, I had never owned a Monopoly set (yet?) but I had the chance to play it at my granduncle's house. It is an old Monopoly set which I can still recall where he placed it, where we played and who we played with. It's just memories like these which are priceless and brings misty to your eyes, at least to me :)

Thats in the 1980's, since then Monopoly had produced numerous editions of this classic board game such as Monopoly Deluxe Edition, Anniversary Edition, Star Wars Edition and etc (extensive list could be found at BoardGameGeek). 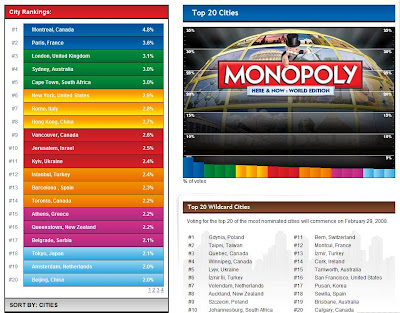 Today, Monopoly will be adding another edition to its list which is "Here & Now : The World Edition". This version will feature Cities across the Globe including Kuala Lumpur - Malaysia, if selected. Uncle Pennybags (the top hat character above) has pre-selected 68 cities including ours, and its up to us to vote for our country. The top 20 will make it into this World Edition, currently Malaysia ranks at 50.

So, if you would like for our county to be in this Monopoly Here & Now : The World Edition, click on the banner above to be redirected to the voting website. As I am writing this post, we have approximately 16 days left to cast our votes. Cheers to all and Good Luck for Malaysia :)

Baby, is the RSS logo (top-right) supposed to be hidden like that?

oh this monopoly vote thingy. the girls in my craft yahoogroups also making fuss about it. but i'm yet to vote. heard that we need to register prior voting? is it true?

Yup.. simple registration. You can select the city first, then when finalising your vote - insert your mail address.

An activation emel will be sent, click on the activation link and your vote will be official :)