After waiting for almost three weeks!! My "first" Monopoly set has finally arrived from the States. By "first" here refers to; literally my my first set and the first of THREE Monopoly sets which had arrived :D It's a bitter sweet moment though, as our customs slightly ripped the box while inspecting the package. Oh well.. nothing like a clear scotch tape couldn't fix.

By now you probably must be wondering as why did I buy a Monopoly set form the States when we can get it over here in Malaysia. Well my friends, just feast yourself on the photos below and you will understand why :) 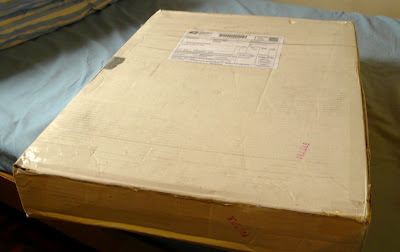 Item is shipped in this plain white box, on the contrary with it's content. Which is... 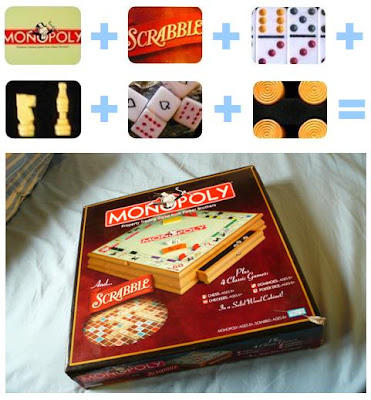 Tadaaa.. not so your average Monopoly huh? This edition features a wooden gameboard which include games such as Monopoly, Scrabble, Chess, Checkers, Dominos & Poker Dice. Take that for a combo or space saving. All the game pieces are also made of wood except for the dices & dominos which are made of plastic and the Monopoly tokens which are diecast metal. 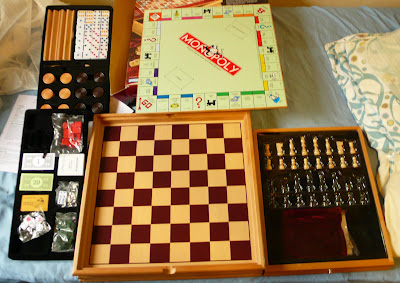 The Chess and Scrabble game pieces are kept in the wooden drawer at the bottom of the main gameboard and others as in the picture below in moulded velvet lined plastic. The Monopoly board when flipped over is the Scrabble board and vice-versa. Overall I'm satisfied with the build quality and the materials used. 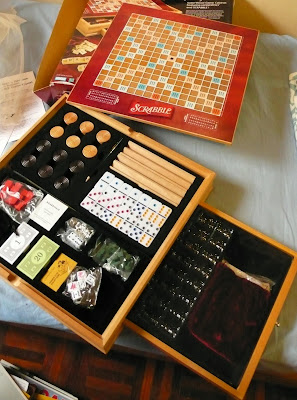 There's nothing much to explain about the gameplay as these are classic boardgames as many had played, easy to learn, strengthen family ties, make new friends and most of all FUN to play. I can't wait to have a go with this new game!! Anyone interested to join in is welcomed. It may sound funny coming from a adult but, the game did say 8+ on the box :D
Posted by kL at 7:30 PM

eii this is not kids game je tau. i still play it with my parents..monopoly, scrabble, chess, even uno!!

I'm interested in getting one set for myself. Could you please tell me the details so I could order one too?

I assume you are from Malaysia too. So, basically you can get it from eBay USA(www.ebay.com), that's where I got mine.

Use "Wooden Monopoly" keyword to search within eBay for a listing. Then, change shipping to Malaysia instead of USA. Thereon, you can filter whether the seller ships item to Malaysia if the shipping has a value.

Price for this monopoly ranges anything from US$20 - US$40 and shipping should be around US$35 to US$45.

For shipping, make sure you request item delivery with tracking, usually its going to be either USPS Priority or USPS Expedited Mail. With the tracking number you can check through USPS website, item current location.

Malaysian custom, usually don't impose any tax for personal purchases below RM500. So far I did not incurred any tax for 4 Monopoly sets I've ordered except for one which costs more than RM500.

Anything you are not sure, just communicate directly with the seller and remind them to pass you the tracking number once item is shipped. Check the eBay rating of the seller to ensure credibility. Anything above 99.7% should be ok. i bought mine from milzike, but currently he has no monopoly sets on sale.

p/s : There is also another version you might want to check out; same design but the games bundled are - Monopoly, Scrabble and Risk.

who want to buy monopoly deal card game?
i've source for it :)
cheaper than popular bookstore :)

**We have other card games/board games as well, such as UNO, BINGO, UNO Stacker etc**