Thursday, 14th April 2005. Yup.. its official.. bout 8.30 pm or so.. pick up my Gen-2 at Proton Edar Seksyen 13, PJ. Afza tagged along since he has time to kill before meeting up with a friend. U can check out the car's launching at Afza's blog or so he calls it. Afza calls it "Blackie".. eventhough i didn't name it, but i think it gonna stick for a while. 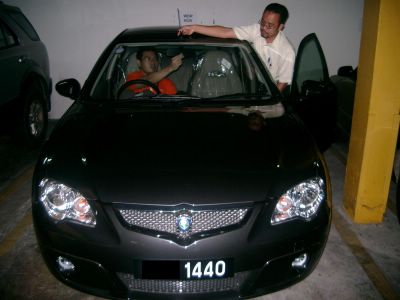 I thought tat it will be a quick process collecting the car.. boy i was wrong.. it turned the other way round but for a good cause.. evidently proton has prepared a checklist to its customer to go through before handing over of the car.. so we spent 15 minutes signing documents and at least 40 minutes inspecting the car.. fiddling with all the lever and contol buttons in the car.. checking the engine.. exterior.. yadda.. yada.. u get the idea.. end point is.. it's my first new car purchase and the experience has been pleasant.

as u can see in da photo that i've chosen 1440 for my reg number.. now why did i do that? Short story is.. way back 18 years or so my family bought our first Proton.. it was a saga aeroback with reg number BCP 1440.. travel a lot in that car and there were many memories attached since it served us 10 years or so.. it wasn't the digital age yet back then so i don't think i hav a photo of the car :( i guess its a tribute to the car that served us well.. hopefully tis car will serve me good as well :)

4 days passed and i've managed to clock 490km on the odometer .. another 510km to go before its first servicing and more importantly.. the "run-in" period will be over.. well u guys.. now i finally can go anywhere on my own without hitching a ride.. but thanks u guys.. esp to Zai, Yang, Len and Afza.. for transporting me around for our activities over the years.. hope i could do the same to all u guys.. and not to forget my family as well.. for always being ther :)
Posted by kL at 2:29 AM

ok... since u insist to return the favor, tomorrow, pick me up for work from my home.

haha kidding.. xhal.. maybe we cld go to Bakerzin for lunch as mentioned..